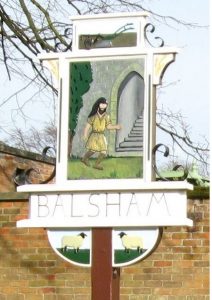 Old village sign, depicting the one resident of Balsham who escaped the Viking invasion in 1018.

I recently visited the London Metropolitan Archives to view some early manor court rolls for my home village of Balsham in Cambridgeshire.

At first, manor court rolls can seem a little overwhelming as a source – until 1733 most were written in highly abbreviated Latin. It takes some effort to access, transcribe and translate them. It’s worth perservering, though, because they can be a very valuable source of information about individuals and families in a period when other sources can be scant.

Manor courts were the place where the business of the manor was carried out. Court barons, which took place every three weeks or so, dealt with exchanges of land, the swearing in of new tithingmen and/or tenants, the pledges of existing tenants and minor disputes or misdemeanours. Court leets, held twice a year, dealt with more series cases within the jurisdiction of the lord of the manor.

In practise, the customs of each manor varied greatly, and some held courts more regularly than others. Moreover, not all manor court rolls have survived, so (as always!) the chance of finding mention of an ancestor depends upon the availability of the records.

In Tudor Balsham, the Elizabethan lord of the manor was one Thomas Sutton, said to be the richest commoner in England at the time. On his death, Sutton bequeathed Balsham Manor, along with his other estates, to establish a school and hospital at the former monastery of Charterhouse in the City of London. As a result of this, the rolls have been reasonably well preserved and most have survived.

The first manor court after Thomas Sutton bought Balsham Manor was held on 14 December 1575. Earlier courts had recorded its jurors and those sending their excuses for absence (called essoin), but these lists were not long and it is apparent that the previous lords had not required all tenants to attend. However, in Thomas Sutton’s first courts, there are extensive lists of villagers, including those who couldn’t attend but who sent proxies, lists of head tithingmen (chief pledges) who were sworn as jurors and a list of customary tenants who were obliged to attend court. In total there are over 60 names of people of Balsham recorded. As such, it is an incredibly rich source of names for the parish.

The parish registers for Balsham have survived from 1560 onwards, and so some of these names can be cross-referenced in with baptisms, marriages and burials. In some cases, it gives more information about the person, such as ‘cleric’, ‘widow’, ‘junior’ or ‘aged’.

Those who couldn’t attend, and the names of the proxies sent in their place:

The chief pledges who were sworn in as jury, in three groups of 11:

The customary tenants who were obliged to attend court were: