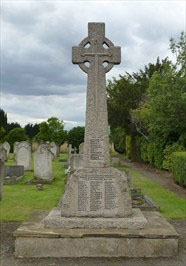 Run by the Imperial War Museum, the website allows you or anyone else to enter information about First World War veterans, for others to see.

So, in a nutshell, today’s technology allows stories about yesterday’s people to be amassed for tomorrow.

You’ll need to be able to identify your veteran – so it would be helpful to know which regiment they served with or, even better, their regimental number. Once you’re sure you’ve found the right record, you can upload photos, stories and memories and family information about your ancestor.

The beauty of it is that this could lead to finding lost living relatives, and finding out more about the lives of veterans in your family through other people’s memories. The timing is great, as a lot of the stories and details are still in living memory, but not for long.

If you had any WWI soldiers, sailors, nurses or other service personnel in your family, take a look and join in at Lives of the First World War

Sarah Squelsh was buried on 12 May 1837, aged 89. The vicar noted in the margin that she ‘had two illegitimate children by Squire Small of Clifton’.

What a fabulous detail which a descendent would otherwise never know. Interesting surname too…

Today’s ‘St Jude’s Day storm’ (as the British media appear to have named it) couldn’t have been given more media coverage; before, during and after the event. Much of this has also looked back to the Great Storm of 1987, which many of us can remember. Occasionally, reporters have mentioned the lesser known storm of 1703 – the worst recorded natural disaster in southern England. I was interested to find out more about it, and the damage it caused.

The Great Storm of 1703 was a catastrophic hurricane that ripped through southern England, leaving devastation in its wake.

After weeks of gales and storms, another strong storm blew up on the night of 26th November. After two hours of winds of up to 70 mph, the full fury of the tempest was unleashed. In the early hours of 27th November, the hurricane, with winds of up to 120 mph, swept across southern England from the river Severn to the Thames and on to the East Anglian coast. It destroyed houses, churches and mills and brought floods to the Severn Estuary and the city of Bristol.

The storm coincided with an increase in English journalism, and so was one of the first weather events to be a national story. There were reports that men and animals were lifted off their feet and carried along in the air. Daniel Defoe described the storm as:

“the tempest that destroyed woods and forests all over England… No pen could describe it, nor tongue express it, nor thought conceive it unless by one in the extremity of it”

Due to lack of warning of the disaster, the Royal Navy lost 13 ships and about 1,500 seamen. It’s estimated 40 merchant vessels and at least 8,000 seamen were also lost. In the New Forest, 4,000 oak trees fell, and all of London’s 120 churches suffered some damage. 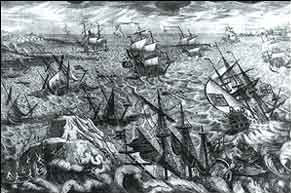 We have been following the approach of the St Jude’s Day storm for a week, and people and services have had plenty of time to prepare for the event. Sadly, four people still lost their lives, but without the advanced warning, many more people would have been engaging in their usual daily routines, and undoubtedly more lives would have been lost and property damaged.

The unsuspecting population of southern England in 1703 wouldn’t have known about the storm until it was upon them. Add to that the fact that the Great Storm of 1703 was much longer and stronger, with winds up to 40 mph faster than those recorded today and lasting for many hours, and it’s no wonder that the loss of human life and damage to property was so much more severe.

The storm was interpreted as punishment from God for the ‘ungodliness of the country’ and a national day of fasting was held in January 1704. The storm was used in sermons for half a century or more after the event to remind churchgoers of the consequences of ungodliness.

I read an interesting story on the BBC news this week about a family appealing for information about the sender of a message in a bottle, found in Norway. 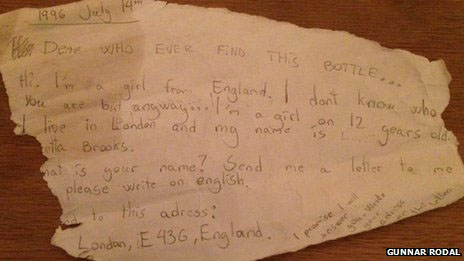 Message found in a bottle in Norway

This appealed to the detective in me, so I began examining the records to see if I could solve the mystery. The sender’s name is hard to read in the photograph, but the article told us she was Loretta Brooks. If she was 12 in July 1996, she would have been born between August 1983 and July 1984. I searched the GRO births index on ancestry and found there was a birth of a Lorretta Christine Brooks in Q3 (Jul-Sep) 1983 in Reading and Wokingham. In 1996 the letter writer claims to be from London, but she may have moved in this time. 192.com states that there is still a Lorretta Brooks living in Reading today. This could be the answer.

However, taking a closer look at the letter, the name is spelt with a single ‘r’, whilst Lorretta Brooks in Reading is spelt with a double ‘rr’. Although I’m used to seeing people spell their names in a variety of ways within historical records, it would be quite uncommon for someone in the 1990s to be inconsistent in this. From the picture of the letter, it looks as though the original part of the letter with her name on has worn away, and the name Loretta has been written in on the previous line. This calls into question its accuracy.

Another question is raised by the grammar used. Although you might expect to see spelling mistakes from a 12 year old, such as her spelling ‘adress’ with one ‘d’, the grammatical errors, such as ‘please write on English’ and ‘I’m a girl on 12 years old’ suggest that perhaps the sender wasn’t Loretta from London at all, but someone using English as a second language – perhaps even from Norway itself?

I hope the children who found the bottle are able to solve their mystery one way or another. It’s every child’s dream to find a message in a bottle, and even if it only came from relatively close to their home, being able to track its history, like tracing a family history, would provide a great sense of closure to their story.

I’ve recently used the services of three occupational organisations and have been reminded of what a great job these smaller archives centres do.

I had great help and quick service from the Metropolitan Police Archives, through which I found the records for four brothers from Kent who joined the force; from the British Dental Association Museum archives, that provided a record in the first published Dental Register; and from the Worshipful Company of Cordwainers, who searched their records to look for a south London shoemaker’s apprenticeship.

Without these valuable resources, these types of records would be lost to family historians, and all of the additional information that provide such colour to a family tree (such as one of the policeman brothers being dismissed after six months of service) would not be available to us.